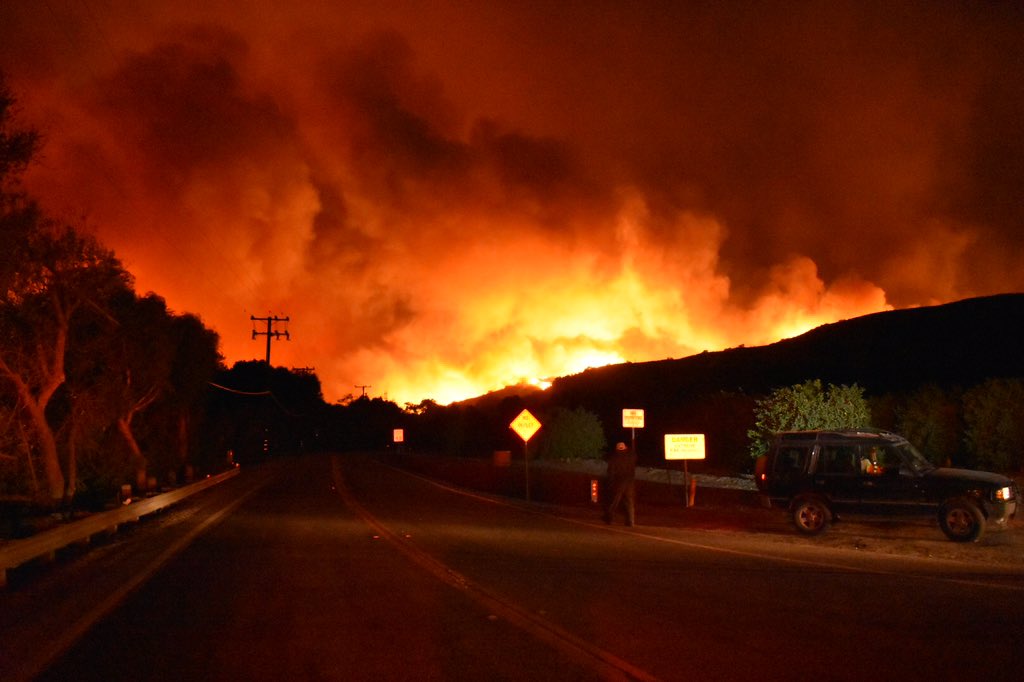 Ventura County Animal Services has responded to numerous calls for assistance during wildfires throughout the years.  The most difficult aspects of evacuations are working with individuals who were not prepared and required our assistance transporting their animals to safety.  Please ensure you are fully prepared to evacuate should the order be given.

Fires VCAS has responded to:

In addition to providing emergency animal rescue and response within the County of Ventura, VCAS often provides mutual aid to neighboring communities during declared disasters.

Officers Serratos and Ochoa spent sixteen (16) days driving across hundreds of acres in an effort to care for and rescue animals in need.  Conditions within the evacuation zone were harsh.  Although the fire had passed in the areas they were deployed to, the ground below their feet sometimes crackled where the fire continued to smoldered.  Despite the difficult conditions, Officers Ochoa and Serratos pushed through to rescue and care for hundreds of animals during their relief effort.

Although the physical conditions were sometimes challenging, it was deeply rewarding to reunite so many animals with their families. Officers Ochoa and Serratos gained emergency animal rescue experience during a number of wildfires over the years.

Visit www.vcas.us/EVRT if you are interested in joining our Emergency Volunteer Rescue Team who are deployed by VCAS during declared disasters to assist in the evacuation and care of animals.

The VCAS.US website has been translated by Google Translate. Reasonable efforts have been made to provide an accurate translation, however, no automated translation is perfect nor is it intended to replace human translators. Translations are provided as a service to users of the VCAS.US website, and are provided “as is.” No warranty of any kind, either expressed or implied, is made as to the accuracy, reliability, or correctness of any translations made from English into any other language. Some content (such as images, videos, Flash, etc.) may not be accurately translated due to the limitations of the translation software.

The official text is the English version of the website. Any discrepancies or differences created in the translation are not binding and have no legal effect for compliance or enforcement purposes. If any questions arise related to the accuracy of the information contained in the translated website, please refer to the English version of the website which is the official version. Ventura County Animal Services employs bilingual staff who are able to provide assistance.  Please call (805) 388-4341 or email info@vcas.us.

Select a language below: